Volodymyr Zelensky has captured the minds and hearts of billions of people worldwide. He has gone from a name many did not know to a household name known by many. This gentleman, a former comedian and actor working among the ordinary people of his country who went on to become president of Ukraine, is now the heart and soul of a nation and a notion—the notion that people should be free to live in their country governed by democratic ideas unmolested by their aggressive neighbor to the east. In so doing, Zelensky has become one of the best examples of leadership to surface on the world stage in a long time. He is shaping up to be a generational leader who will live on in the annals of history. He is an incredible example of leadership and the epitome of Purposeful Leadership®.

In the Purposeful Leadership Model, there are Five Commitments the most effective leaders demonstrate. Let’s examine them here:

The BECOME commitment is the “inner” journey of leadership. It is the part of leadership that no one sees—immediately. Who a person really is at their core is not always evident. At some point, though, a triggering event—a test—reveals the true nature of a leader. When the test comes, it’s too late to prepare. The leader must answer the call by what they have put into themselves before the examination.

In Volodymyr Zelensky, we see courage and tenacity borne of steely conviction right before our eyes. We see strength of character years in the making. He was becoming a leader the world would need, and he has admirably answered the call.

Zelensky has inspired people by his ability to communicate evocatively using the skills he no doubt honed as a comedian—from eloquently delivering his message before Parliament and presidents to using plain simple everyday language to inspire grandmothers and generals. He has inspired his people not just by his words but by his actions. On February 25, 2022, he reportedly said: “I need ammunition, not a ride!” in response to an offer to try to lead the war for his people from the safety of another country. His statement will go down as one of the most powerful quotes of this young century.

The image of Zelensky, often wearing army green T-shirts and camouflage pants, staying to fight with his people and in the trenches with his men, contrasts starkly with his opponent, who, always dressed in fine clothing, refuses to even be seated near those he leads. 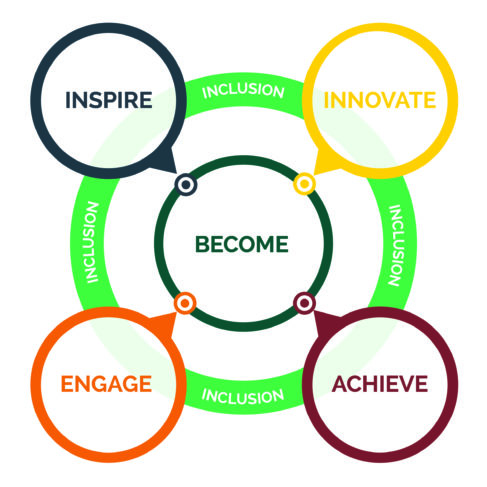 Zelensky’s visible leadership combined with his powerful words has truly inspired his people. He has moved wives to leave their precious children at the border of Poland and return to fight alongside their husbands. He has moved actors and athletes to exchange luxurious garb for military gear—everyone fighting the battle with heart.

Not only did Zelensky inspire his people, he inspired others across the globe, therefore engaging support from the rest of the world. Once it was clear how engaged the Ukrainian people were and how willing they were to fight for their country—even to the death, the world joined in to help, providing military aid in the form of weapons and finances, supporting humanitarian organizations, and aiding refugees, as well as soldiers from other lands helping the Ukrainians in their fight. In contrast, if the world saw disengaged people, there would be little motivation to support them.

It’s also worth noting that Zelensky’s influence has engaged his political rivals in Ukraine to unite with him in his inspirational vision. His influence has even permeated the United States Congress, producing rarely seen bipartisan support for actions on Ukraine’s behalf.

Once Zelensky had people inspired and engaged, they started innovating. Ukrainians began learning how to make Molotov cocktails and other rudimentary instruments of war to help defend their homeland. Those who had never fought before learned how to use weapons and banded together to find innovative ways of fighting one of the world’s most powerful military forces, including creating roadblocks and scrambling street signs to confuse the enemy.

Because of their innovative approach to this war, Ukrainians are successfully derailing the Russian army from what was assumed would be a short decisive victory. They have fought bravely and frustrated their would-be captor. They have blown up tanks, taken soldiers, and forced them to call their mothers back in Russia to admit what they are doing, and more!

Look at just three of the sixteen behaviors, for example, and it becomes a case study in the difference between Zelensky and his opponent:

Zelensky’s opponent is not listening to a vast network of advisors, does not encourage dissonance, and won’t let anyone get close to him. On the contrary, Zelensky is doing these three things with precision, and it’s making a difference.

Another element of inclusive leadership worth considering is that an inclusive leader acts in alignment with personal values in challenging, conflicting, or ambiguous situations.

Here again, we see Zelensky excel, as well as realize the importance of the Become commitment. Building ourselves as leaders during times of peace prepares us to assume the mantle of leadership during times of stress and conflict and lead effectively as Purposeful Leaders.

Who we select as a leader matters. Had the Ukrainian people had another leader during this crucial time, where would they be? Having a Purposeful Leader could be the key to surviving this existential crisis and indeed will be an essential ingredient in the massive rebuilding effort required in the aftermath of this horrific tragedy.

The mission of Linkage is to “Change the Face of Leadership.” Zelensky’s exercise of Purposeful Leadership is proving to “Be the Change We Want to See!”

Eddie Turner is a Linkage Principal Consultant and an in-demand leadership development expert. Eddie has worked as an executive coach for senior and emerging leaders, and Forbes has called him the preeminent authority on emerging leaders. He also delivers keynote speeches and facilitates learning delivery and executive strategy sessions.

Workplace Trends Organizational Leaders Need to Know About in 2023