This week, the world lost one of its most courageous female war heroes, Nancy Wake

In recognition of our upcoming Women in Leadership Institute in November, we’ve be posting advice and tips from professional and influenctial women leaders around the world. This week, the world lost one of its most courageous female war heroes, Nancy Wake. 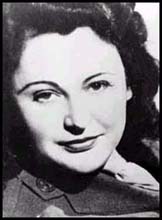 Nancy Wake, World War II (WWII) heroine and prominent figure in the French Resistance passed away in London on Sunday, August 7 (just 23 days short of her 99th birthday). She was a decorated servicewoman who, for her courage and feats during WWII, was awarded nine bravery medals, including the Medal of Freedom from the US, the George Medal from Britain and the Medaille de la Resistance from France.

“a woman of exceptional courage and tenacity, who cast aside all regard for her own safety and put the cause of freedom first.”

‘During WW11 Wake and her husband, Henri Fiocca  helped Allied servicemen and Jewish refugees escape into Spain before she took her partner’s advice and fled to England in 1943, where she began work in special operations. She parachuted back into France in April 1944 before D-Day, tasked with helping distribute weapons to Resistance fighters.’ To read more about her courageous story, click here.

Interested in learning how to be courageous at work? Don’t miss our webinar with Bill Treasurer  on Using Courage to Transform the Workplace