The Magic Wand: My Moment of Self “Anointment”

It was two weeks before my first big keynote—the one I have now referenced too many times in recent blogs—at Linkage’s Women in Leadership Institute™ this past November. I was fretting about my pending presentation to 600 women leaders. I had my content down pat. I had even followed the advice of every speaking coach and simplified my slides to just a few. In some ways, I had prepared for this all my life, given that my Dad had thrown me into children’s theater at the age of six, and I had grown up thinking that acting actually might be a viable career.

Yet, as the date approached, I was haunted by this little (okay, loud) voice that said, “Who do you think you are? You are not the Harvard Business School professor who has ten million views of her TED Talk. And you are certainly not anything close to an Academy Award-winning actress (Geena Davis was taking the stage the day after my talk.) You are just an average, everyday working mom who is trying her best to be a good wife, mother, daughter, sister, friend, manager and employee.”

And then came my first aha moment: I am them! I am my audience. I am not a billionaire. I most likely won’t run for president or do some heroic physical feat and live to tell the story. I am them. That notion satiated me for a few days. I would kick off my talk by normalizing the hell out of how I am an every-woman mid-career leader trying to manage a very full plate—just like them. But then the “who do you think you are” question crept back into my head. Marianne Williamson’s “Return to Love” poem came to mind and was some comfort. In it, she says:

“… It is our light, not our darkness that most frightens us. We ask ourselves, ‘Who am I to be brilliant, gorgeous, talented, fabulous?’ Actually, who are you not to be? Your playing small doesn’t serve the world. There is nothing enlightened about shrinking so that other people won’t feel insecure around you. We are all meant to shine…”

And then came the big aha moment: deep down I knew I wouldn’t bomb. I was simply waiting to be anointed. I was waiting for someone to declare that I was “fit to speak” to 600 women. It wasn’t enough that my boss and several of my friends and colleagues had confidence in my abilities. I was unconsciously looking around for the “big” go-ahead. Then I paused and realized that the Harvard Business School professor with the big TED Talk must have decided somewhere along the way that she was an expert in her field. Even Geena Davis probably realized at some point in her life that she was motion-picture worthy.

I suddenly had this vision of all the experts in history around the world having this same aha moment—either unconsciously or consciously—when they anointed themselves. I immediately thought of a magic wand—one that I would hold, not to bless or anoint others, but to point at myself and bless me worthy of presenting at a national institute and to hundreds of participants.

For Christmas, a good friend and colleague gave me an actual wand. It sparkles. It’s fabulous. And when I showed my 8- and 11-year-old daughters, I made it very clear that it was Mommy’s.

Could you use your own magic wand? What have you been waiting to be anointed as? What could you be or do right now? 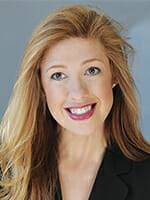 Susan MacKenty Brady is the wife of Jamie Brady, the mother of Caroline and Abigail Brady, a daughter, sister, aunt, and friend to many (too few hear from her often enough), the Executive Vice President of Global Programming and Market Strategy, and Principal Consultant at Linkage, an executive coach, and a champion of advancing the acceleration of women leaders. She can be reached at sbrady@linkageinc.com or on Twitter @Susanmbrady1.