Are You Becoming a Wise Leader?

Executive coach Richard Leider is widely recognized for his work helping leaders discover the power of purpose. His sage advice about finding purpose gives us the opportunity to look inward; to discover new things about ourselves—and to lead differently.

We’re thrilled that he’ll be joining us again as co-chair of our Global Institute for Leadership Development®, October 1-4, 2018 in Palm Desert, CA. He will help our participants tackle big questions like: “Why would someone choose to follow me?” and “Am I on a path to becoming a purposeful leader?” Here, he shares the important and often overlooked distinction between being smart and being wise as a leader.

“When there is no enemy within, the enemy outside can do no harm.” —African proverb

The ultimate test of wise leadership is this: Do you serve the common good of others? Do you have a purpose larger than yourself for leading?

Most of us have a keen awareness of wisdom when it is present in our leaders (and in ourselves). And, we have an uneasy feeling of distrust and disengagement when it is absent.

To become a wise leader, one must be “people-wise.” They must have a feel for people—their hopes, fears, passions and purposes. Second, becoming a wise leader means understanding why things are the way they are, like Aristotle claimed. To him, a smart person knows a lot about what and how, but a wise person understands why.

But how do you get to the why? Have you recently heard your inner voice whispering things like:

This is the enemy from within speaking to you—the one that creeps in when we need to step outside of our comfort zone. It’s the voice of fear. We all hear it occasionally—it’s part of being human. The answer is not to kill it or suffocate it, but to dive headfirst into it! Identify the voice with choice, curiosity and courage.

Why? Because what you resist will persist. There’s one story in particular that comes to mind when I think about the iconic leaders in history who have found their why.

Nelson Mandela’s decision to take action in what could have been a very tenuous situation reflected the truth about what it means to become a wise leader.

When Mandela became President of South Africa on May 10, 1994, he faced countless challenges outside of his comfort zone. And, he faced his inner voice of fear. Upon his release from prison, he was greeted with banners reading, “Mandela, Go Home to Prison” and “Hang Mandela.”

He effectively channeled his people wisdom to take a stand for what he believed in—to serve the common good of all others. To become the leader that South Africa needed, he chose to embrace the national rugby team, the Springboks.

The team was popular with Afrikaners, but to most blacks, the Springboks represented the apartheid system that they despised. Nevertheless, Mandela chose South Africa to host rugby’s World Cup the following year with the slogan “One Team, One Country.”

As the Springboks began to win in the fierce World Cup competition, the mood in the country shifted. When the players (all but one of them white) showed up in public, they were greeted not just by Afrikaners, but by black people as well. The Springboks made it to the finals. They were to play the New Zealand All Blacks, considered one of the finest rugby teams in history.

Five minutes before the game started, in front of 65,000 chanting and singing fans, Mandela walked into the stadium wearing a Springbok’s jersey, the very symbol of apartheid that so many hated. With millions more watching on TV or listening on the radio, the crowd of mostly Afrikaners went wild with a deafening chant of “Nel‐son,” “Nel‐son!” In that moment, the country was united—“One Team, One Country.” It was the moment that many people realized that this country could work.

Mandela showed that he could forgive and become the wise leader they wanted. The Springboks won the thrilling championship game in overtime. Mandela’s stand embodied what it means to be “people‐wise.” After decades of apartheid and 27 years in prison, it would have been natural for him to focus on the wants of his black constituents at the expense of the broader interests of the country.

But, Mandela had become a leader with a people‐wise view. His actions toward the Springboks served as a powerful symbol of what the new South Africa might be like. They reflected his wise awareness of how others very different from himself would react to changes accelerating around them.

Nelson Mandela’s story has two critical things to teach us about becoming wise leaders. First, “becoming” means clearly understanding the difference between being smart and being wise—they’re not the same. Wisdom demands insight and effectiveness with people. A leader can be very smart without being smart about people.

We like to believe that our leaders are smart people. But, as Nelson Mandela showed us, being smart is not enough in the long run. So, how does one go from being a smart leader to becoming a wise leader? Start by seeing the world differently—from the inside out. A wise leader is constantly becoming more self‐aware. Without self‐awareness, it’s very hard to move out of smartness.

The late Warren Bennis wrote: “The leader never lies to himself, especially about himself, knows his flaws as well as his assets, and deals with them directly.” Even though Bennis mentored CEOs, taught countless soon‐to‐be leaders while teaching at Harvard, MIT, and USC, and advised U.S. Presidents John F. Kennedy, Lyndon Johnson, Gerald Ford, and Ronald Reagan, he never pretended he knew everything. He wrote, “To an extent, leadership is like beauty: It’s hard to define, but you know it when you see it.”

Do you see it in yourself? Do others see it in you? Take this short quiz to clarify the power of your purpose at work. 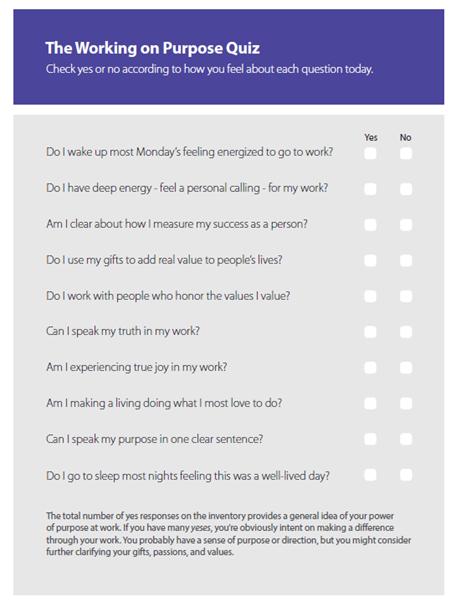 Richard Leider, founder of Inventure – The Purpose Company, is the author of ten books, including three best sellers, which have sold over one million copies. Repacking Your Bags and The Power of Purpose are considered classics in the personal growth field. Richard’s PBS Special – The Power of Purpose – was viewed by millions of people across the U.S. His newest book, Who Do You Want to Be When You Grow Old?: The Art of Aging on Purpose will be available in 2021.