Reflecting on the Life of Ruth Bader Ginsburg

The day after Justice Ruth Bader Ginsburg’s passing, I left my home in our nation’s capital and made my way to the majestic steps of the Supreme Court. In the wake of such a significant event, it felt natural to stand alongside others who were reflecting on her legacy and to share in a moment of both grief and gratitude.

Upon arriving, I witnessed the sea of flowers and remnants of candles that had been lit in reflection. I surveyed the American flag, lowered to half-staff. I read the messages posted by mourners in handcrafted signs or scrawled in chalk on the sidewalk. But, above all, I watched the diversity alongside me—old and young, black and white, gay and straight, individuals and families. I especially watched the parents who had brought their young children—their young daughters—to pay respect. 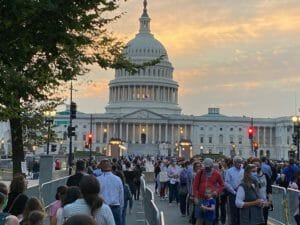 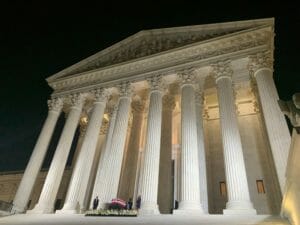 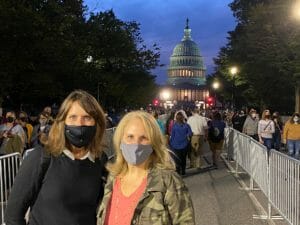 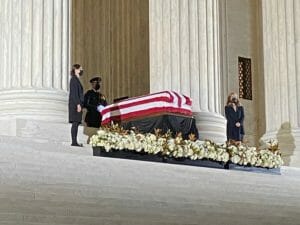 What does it mean to this youngest generation of women to see a woman ascend to the highest levels of leadership, the height of her profession, and to do it all with such incredible discipline, thoughtfulness and grace?

Justice Ginsburg was a role model for women and young girls everywhere, from the moment she broke barriers entering Harvard Law School. As only the second woman to serve on the Supreme Court, she was a trailblazer who has made my own path easier—as a wife, mother and executive.

Her professional accomplishments alone would be enough to give her a lasting and well-deserved legacy. But what made her truly transformational as a leader—a genuine legend—was her ability to thoughtfully and consistently take on the hard work to advance the interests of women of all backgrounds…and in so doing, she helped men, as well.

A pioneering advocate for women’s rights, her decisions as a justice continue to positively impact women in the United States every day. Her personal leadership on issues related to women’s leadership, advancement, and sex discrimination remain a cornerstone of the continued fight for gender equality.

I am saddened by the loss of this fearless leader. But she left us with the framework—the language, the process, the capacity—for the continued advancement of women at all levels.

RBG inspires me to bring increased tenacity and passion around my own purpose to support gender parity within corporate America, through our work and team here at Linkage.

And, there is much work to be done. Women continue to be underrepresented at every level of organizations. In most cases, they aren’t making it to the top: Just 6 percent of chief executives in the US are women.

Justice Ginsburg said it best: “Women belong in all places where decisions are being made.”

Together, in her memory, we will fight to get them there.

Last Thursday, I returned to the Supreme Court, and waited in line alongside thousands of others to be close to her, to whisper a heartfelt thank you, and to promise her that I will do everything I can to continue her legacy.

Jennifer McCollum is CEO of Linkage, Inc., where she oversees the strategic direction and global operations of the Boston, MA-based leadership development company. With a mission to “Change the Face of Leadership,” Linkage has dedicated 30 years to improving leadership effectiveness and equity in hundreds of organizations globally. Linkage provides assessments, training, coaching, consulting and conferences, with Solutions designed to Accelerate Purposeful Leaders; Advance Women Leaders; and Redesign Inclusive Organizations through Superpowers & Symphony.

The “Perfectionist” Trap: How Women Leaders See Their Value at Work—and How They Can Break Through in 2023

The Best Teams Have Impact Players — Here’s How to Create (and Manage!) Them | Best-Selling Author Liz Wiseman Tells Us How