Fit to Lead: Continuously Earning the Right to Remain at the Top

The Olympics are one of my favorite sporting events; I love watching the world’s best compete for the title of the world’s best. The number of hours these remarkable individuals spend on building, maintaining and exceeding their position is astounding and inspiring. During the recent games, I was struck anew by their dedication, diligence and impressive grace under pressure. It also got me thinking about the concept of being fit to lead.

Elite athletes are in a continuous loop of competition, repeatedly striving to better themselves, similar to how great leaders operate. They don’t take their position for granted; they are continuously earning their right to lead, and in so doing, become an inspiration to those who follow them. Becoming that kind of leader requires physical, mental, social, and spiritual fitness, which forces you to have discipline, perseverance, humility, strategy, vision, and commitment—much like an Olympic athlete.

Leading Can Be a Lonely Endeavor
There’s an image from the 2008 Beijing Olympics that shows an athlete, walking off the track after a 100m dash, in the pouring rain, alone. This picture is of my good friend Bryan Clay, a two-time Olympic medalist. He’d just won the decathlon, with 30 million people watching worldwide. Yet, he could not have looked more isolated. 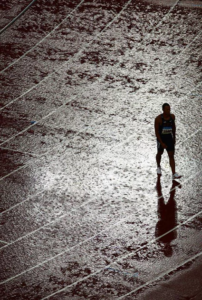 I recalled this image during a recent engagement with a client. He had just been promoted to president at his company, was winning every effort he turned his hand to, had an engaged team following him with passion. But he couldn’t come to terms with how alone he felt leading his team rather than being a part of it.

Athletes don’t train alone. They have coaches, nutritionists, teammates, partners, families, and fans. But the actual act of competing is a solitary one. Leaders are surrounded by talented individuals who make up their team, but the group’s focus, its energy, is provided by the leader. It takes a great amount of vision and dedication to take on that role. This is where that mix of physical, mental, social, and spiritual fitness is most important. If you are not well balanced, then your fitness to lead can be compromised.

It’s All on You
For two days, Bryan ran, jump, and threw in the Decathlon with a bib that read “Leader” on his chest. He led himself to a gold medal—and the title of “world’s greatest athlete.” Clearly, the guy knows a thing or two about perseverance and excellence, and I’ve learned a lot from Bryan. After his successful career as an Olympic athlete, he’s become a great speaker, business owner, and advisor to top leaders around the world.

I gave Bryan a call recently to get his viewpoint on being fit to lead and what it takes to be a world-class athlete and a leader in his own right.

MN: The image I’m thinking of—you in the rain, winning the first event at the 2008 Beijing Olympics—looks lonely. What was going through your head after that race?

BC: It’s actually my favorite picture from the games. Because to me, everything about the decathlon is summed up here. You’re in the worst possible weather, you’re exhausted, and there is nobody else there to help you. It’s all on you. Why is it lonely? There is nothing like traveling halfway across the world, sitting in a hotel room by yourself, your family is at home, everything you love and need is on the other side of the planet, and you know you have to get up and be the best in the world. Figuring out how to navigate that pressure, without your usual support, is just so difficult. And it’s often the same for leaders. They’ve worked their way up to the top, but once they are there—it’s all on them. Everyone looks to them for guidance, for approval, for vision.

MN: How did it feel to walk around with the leader bib for two days?

BC: A part of me felt like a badass—I was in charge. Another part of me was scared to even look at it. I didn’t want to get distracted. Having power and being a leader can be a distraction. And just like I’d lose the leader bib if someone passed me—you can just as quickly gain or lose a title, a job, a position. It was a great reminder that power can be fleeting, and you have to continue to earn the right to keep the lead.

MN: How important is physical fitness in being a good leader?

BC: I’m sure there are plenty of really sharp people that aren’t physically healthy. I look at physical fitness as a depiction of who you are as a person. Does this person have discipline? It speaks to perseverance, self-control, doing things you may not want to do but are necessary. Poor fitness speaks to lack of a lot of these things. When I don’t find time to work out, my energy is lower, and I generally feel lousy. Some of the best lessons I learned in life was when I literally ran myself to the ground and had nothing left to give. Fitness gives you a chance to see what you’re really made of, what your breaking point is.

MN: What can leaders learn from what it takes to be fit to lead from a decathlon competition?

BC: You don’t go win a gold medal without a strategy—an extremely precise training and progression plan—or agile management skills. It takes a lot of physical and mental energy to constantly pivot from one type of training to the next and you’re not always working with the same coach. Learning to manage that and then excel at it, takes practice. And that’s only leading up to your competitions. Leaders, in the same way, have to learn to manage their teams as well as propel their businesses forward—these things are not always in neat packages. Finding that balance, trusting the people you’ve surrounded yourself with, and remembering that ultimately you are in charge, are all very important.

You also have to be ready to make tough choices, like firing a coach because the magic isn’t there. There will be times as a leader where you’ll have to make changes to your team because a team member may not be performing optimally or meshing with the rest of the team. It’s never easy, but it’s necessary.

MN: How do you move on from set-backs at a competition level and a career level?

BC: I think the biggest thing is to know your endgame and have perspective. If your endgame is just that particular deal or that particular job, you’ll get to the end of it and you’ll still be empty. But if you know what you’re building toward, then each part—whether it’s a win or loss—is one step toward a bigger whole. I was talking to a friend the other day—who looks insanely successful on the surface—who said, “It’s hard to have fun anymore.” So I asked, “What’s fun?” And he said, “Winning.” If it’s just about the win, you’ll look back on your career and could have won everything, but still not have found your purpose or what you’re really looking for or working for.

MN: Did you ever think about making a comeback?

BC: Not at all. I was able to do everything I wanted to do in track. No regrets. I did it all—and it was just one thing as I work to my end game, my purpose. I’m a man of God, a husband, a father: to serve God, to have my wife feel like nothing is above her, and for my kids to believe they are my priority and to want to be like me when they grow up.

********
Achievements like Bryan’s are clearly not an everyday occurrence. But his commitment to his craft and his desire to earn the right to be the best are both relevant in our role as everyday leaders. Being fit to lead in a remarkable way won’t happen overnight. But like an athlete’s precise training and progression plan and agile management skills—these are things that current and aspiring leaders can implement to improve themselves and earn the right to be leaders.

Some questions I’m left with, and that I’ll leave you with:

Matt Norquist is the former CEO of Linkage. He has a passion for driving business change at the leader, team and organizational levels. Matt led Linkage’s largest research study in the firm’s 30-year history. The culmination of this data formed the foundation for Linkage’s Purposeful Leadership® model, a proven framework that is equipping leaders globally to achieve better business performance.

Out of time? Here are 4 ways to make progress every day