Leading and coaching a team of people is obviously not the same as dog training. However, we all can learn from Cesar Millan—the star of the popular television show the Dog Whisperer—because he understands the importance of intentions, energy, and impact when it comes to coaching and leadership as well as working with dogs and their owners.

If you’re unfamiliar with the show, it’s really pretty simple. Cesar gets called in to help owners of unruly, untrained, or poorly trained dogs. He uses his extensive knowledge of dog behavior to set some healthy boundaries. He helps the dogs feel safe while also skillfully working with the owners to help them reinforce the good behavior he’s modeling with his dogs.

Sounds like a leadership development coaching assignment doesn’t it?

Cesar is successful because he understands how people can get in the way. He knows that if you’re clear with your intentions for your dog—i.e. set clear boundaries and acceptable rules for behavior—the dog will be happier and better behaved simply because it knows what to do. Generally speaking, the behavior problems often lie with dog owners not being clear with their intentions rather than with the dogs. And the same can often be said for leaders and coaches. Clear goals are critical.

Cesar is also highly sensitive to the energy he communicates because the owners he works with often react to their dog’s behavior with fear or anger. Dogs are highly sensitive. They pick up on their owner’s negative energy and most often their behavior only gets worse. However, the dogs on the show respond to Cesar because he’s firm but positive. The dogs sense that he truly cares for them and is only trying to help. He leads with his heart and the dogs respond to his positive, nonverbal energy as much as his specific commands. The leadership coaching lesson here is your people can pick up on your energy too. How you lead and the energy you bring to every conversation (and meeting, and email) is just as important as what you say. A positive change in your energy can lead to a positive change in your team’s behavior.

The owners Cesar works with are set up for success after he leaves because he sets reasonable goals (for both the dogs and the owners) and helps them really understand the impact of the training. And this is exactly what a good executive coach does. In a perfect world, executive coaches help leaders gain clarity about what’s expected of themselves and their team. They coach executives to eliminate negative energy from their workplace interactions, and then hold them accountable for improvement.

So let’s hear it. Does your energy speak louder than your words? Are you or someone you work with in need of an energy adjustment? 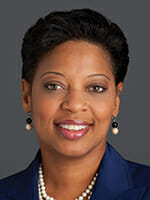 Darlene Slaughter is a Principal Consultant at Linkage. She also leads the development of Linkage’s Inclusive Leadership and Advancing Women Leaders practice areas. She is the Chair of Linkage’s Institute for Leading Diversity and Inclusion™. Formerly, she was Vice President and Chief Diversity Officer for Fannie Mae. Connect with her on LinkedIn.

Purposeful Leadership is in the news

Are You on the Move? Maybe You Should Be…