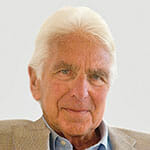 Leadership development pioneer and longtime Global Institute for Leadership Development Co-Chair Warren Bennis has inspired generations of leaders and academics. And his recent passing has prompted many to write thoughtful tributes to him and the impact he made.

“It was Warren who first said leadership is not a set of genetic characteristics, but rather the result of the lifelong process of self-discovery. That process enables people to become fully integrated human beings who know themselves and bring out the best in others. As he once wrote: ‘The most dangerous leadership myth is that leaders are born – that there is a genetic factor to leadership. This myth asserts that people simply either have certain charismatic qualities or not. That’s nonsense; in fact, the opposite is true. Leaders are made rather than born.’”

In Lessons from Leadership Guru Warren Bennis Inc.com reporter Will Yakowicz writes: “Bennis learned his first leadership lessons on the battlefield during World War II as one of the youngest army lieutenants to serve in Europe. Over time he developed inspired leadership theories that disregarded “command-and-control” as a creativity killer and touted passion, integrity, curiosity, and seeing beyond quarterly numbers as drivers of success.” And he also compiles a list of the most memorable Bennis quotes including “The manager does things right; the leader does the right thing.”

And in “Warren Bennis: Leadership Pioneer” Harvard Business Review editor-at-large Julia Kirby pays Bennis the ultimate compliment: “The sad news came over the weekend that Warren Bennis has died. For us at HBR it is the loss of a longtime author and friend. Many, many more will miss him, too, as a teacher and adviser.

“Let’s define ‘longtime’: Warren’s first piece in HBR appeared in 1961. It was called a ‘Revisionist Theory of Leadership,’ and that is what it delivered. A half-century later, its message does not sound so revisionist: that in a business environment marked by increasing complexity and constant change, organizations require not autocrats at the top, but leaders with more humanistic, democratic styles. (For shorthand, Bennis liked the phrase from ‘macho to maestro.’) At the time, however, corporate titans were very unlikely to see things that way.

“Warren liked to call himself lucky. In the last piece he wrote for HBR, a personal reflection, he even claimed that the keys to his successful career were ‘inglorious’ ones: ambition, insecurity, labor, and luck. But as the old saying goes, people can make their own luck. The fact is that he seized on leadership as a topic when it wasn’t taken seriously, and stayed with it as it rose in legitimacy – indeed, helped to make it important as his own insights evolved based on constant, thoughtful interactions with real leaders…”

Those are just a few memories. Below, please share how the ideas and teachings of Warren Bennis have impacted you.