At the 2010 Leading Diversity Summit, Seth Resler sat down with Seth Smiley, who at the time was a Corporate Diversity Consultant with Highmark .  (Seth is currently the Manager of Diversity & Inclusion at Walt Disney Parks & Resorts.)

Tell me a little bit about Highmark.

Highmark is a large nonprofit. It is one of the Blue Cross Blue Shield plans. We are a health insurance company in western and central Pennsylvania; in addition to health insurance, we also have Vision Davis United Concordia. So, we offer a whole vertical integration of insurance.

What is your role within the company?

My title is Corporate Diversity Consultant—I am responsible for implementing our inclusion strategy.

Are you involved in the formulation of the strategy as well?

Yes—one of the incredible things that Highmark has done in this particular space is that almost everybody has been involved in the strategy. Sara Albacarter came in as our director of talent acquisition and diversity inclusion—she took over in early 2009 and through a very collaborative effort, involved our diversity council, our eight executive senior leaders, and all of the business resource groups that we have in the process of developing what our diversity inclusion strategy would look like. So, I think everybody at some point in the process has had some involvement with the formation of our strategy.

One of the things that you talked about is leveraging your LGBTA network.  Tell me what you mean by that.

One of the things that I was specifically brought onboard to do at Highmark was to launch business resource groups. A little different name than what most corporations call their employees resource groups—employee networks.

We wanted to really focus on the business piece of it. Ultimately, tying things back to our life and the marketplace. I spent an hour sharing about how Highmark leveraged lesbian, gay, bi-sexual, transgender, and allied employees.  Allied, meaning bringing everybody to the table in terms of their efforts in the workplace.

Highmark has done an incredible job with guidance and direction from the office of diverse inclusion to create, leverage, and implement a holistic inclusion.

Now I know when you come to events like the Leading Diversity Summit, you like to stir things up a little bit. You like to ask some provocative questions. What questions perhaps should the D&I community be asking itself that it might not be?

That is a really good question. I think one of the things we’ve got to think about is are we doing it the right way? Are we including everybody at the table?

When I started working in this area ten years ago, I remember my first diversity inclusion conference. It was a working mother’s conference in Miami Florida in February of 2001. I really did not feel connected to the people that were there. I felt a sense of exclusion, being a white male. It was not until that last day at the conference when I heard a speaker talking about micro-messaging that I began to understand that that is what I was experiencing. I took that back to the workplace and I began to notice how other people experience micro-messages, both micro-equities and micro-advantages in the workplace. 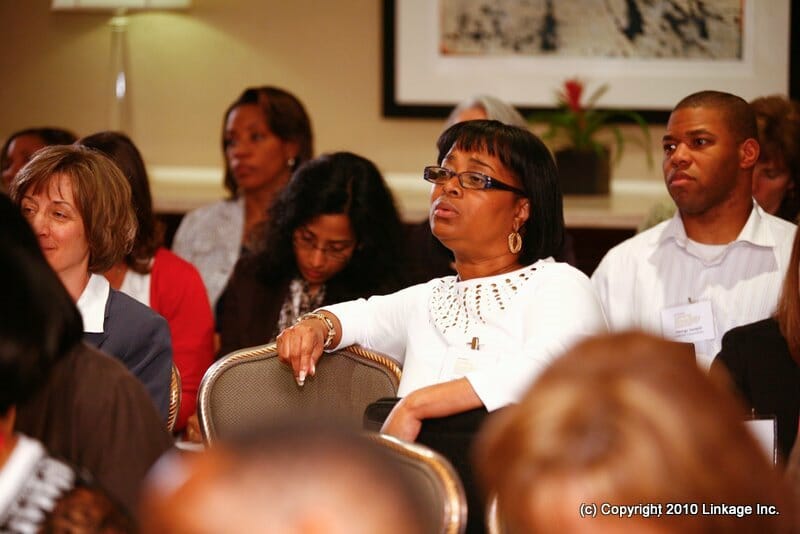 Members of the audience at the 2010 Leading Diversity Summit

Micro-messages are those tiny things that happen on a daily basis that in and of themselves, taken just by themselves do not mean anything, but when they add up, they will disengage you, they will reduce your productivity, they will make you feel less than or not part of a team.

So, for example, if you are left off an e‑mail that goes out to the team one time—not a big deal, but if you are consistently not asked to the table that begins to de-motivate you. And I was at first very much feeling like an outsider in this space. Today, I do not feel that way, but I think we need to look at it as a group.  Are we creating insiders and outsiders?  Do we have discourse within our own profession and do we stir it up?  Do we allow for conflict? Because I think conflict is good.

Over the ten years that you have been doing this, have you seen a change?

I have actually. These conferences have changed tremendously.  In 2001, the Summit was 95 percent African American.  Today it is a rich mix of diverse people, different races, genders, and sexual orientations. I see more Asians this year than I have in previous years. I would like to see more Hispanics and Latinos. There has also been a lot of work in the disability space. So it has changed tremendously.