Having been called the “Dean of Leadership Gurus” by Forbes magazine, the leadership development legacy left by Warren Bennis is legendary. In addition to his many accolades, Linkage honors his memory by awarding the Warren Bennis Award for Excellence in Leadership every year at our Global Institute for Leadership Development™ (GILD™).

This award is given to honor the courage, endurance, capability, and the success of leaders and highlight their achievements to inspire current and aspiring leaders around the world.

Later today at GILD in Palm Desert, California, we’ll be presenting Ken Blanchard, a prominent, gregarious, sought-after author, speaker, and business consultant who is universally characterized by his friends, colleagues, and clients as one of the most insightful, powerful, and compassionate individuals they know with this well-earned award. 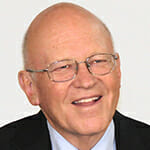 Ken Blanchard is Chief Spiritual Officer of The Ken Blanchard Companies, an international management training and consulting firm that he and his wife, Dr. Marjorie Blanchard, founded in 1979 in San Diego, California. Two graduate programs that have incorporated Ken Blanchard’s leadership philosophy are: Grand Canyon University, which offers an EMBA from The Ken Blanchard College of Business; and University of San Diego, which offers a Master of Science in Executive Leadership. Both are innovative values-based graduate degrees for established and emerging business leaders.