What do mentorship and sponsorship have in common—and why is it so important to understand the difference?

Advancing in the workplace is no small feat. The hurdles to overcome are countless, and when we look at women and other underrepresented groups (URPs), the obstacles are even greater.

Bottom line: Organizations with more diverse leadership outperform the competition—and the culture of inclusion they create supports a thriving workforce.

During a webinar hosted by Catalyst, Jennifer McCollum, CEO of Linkage, sat down with Lorraine Hariton, President and CEO of Catalyst, and Leslie Lynn Smith, National Director of GET Cities (Gender Equality in Tech), to discuss ways to advance gender parity through executive sponsorship. Check out a full recording of their conversation here and check out this briefer below.

“A mentor is someone who has the knowledge and will share it with you, but a sponsor is a person who has power and will use it for you,” says McCollum. “Sponsorship is really about people in positions of influence and power using their personal capital to be active champions.”

Mentorship is an informal relationship that happens naturally in the workplace, most commonly between white men. Historically, white men have held leadership positions, so, due to a concept known as “similarity bias,” they often identify people who are like them to hire, mentor, promote, and more. “People like us help people like us,” says McCollum. “We can break this cycle with formal sponsorship programs.”

Who Can Be an Executive Sponsor?

The executive leaders who serve as sponsors are the core of any sponsorship program. Understanding who can, and should, be a sponsor and how they can be effective in the relationship is another essential step in a successful program. Effective sponsors are not only in positions of influence and power, but they are willing to use their position and resources to actively advocate for the underrepresented leaders they are sponsoring. These executives are highly respected and trusted as inclusive leaders who are committed to taking on this challenging work. 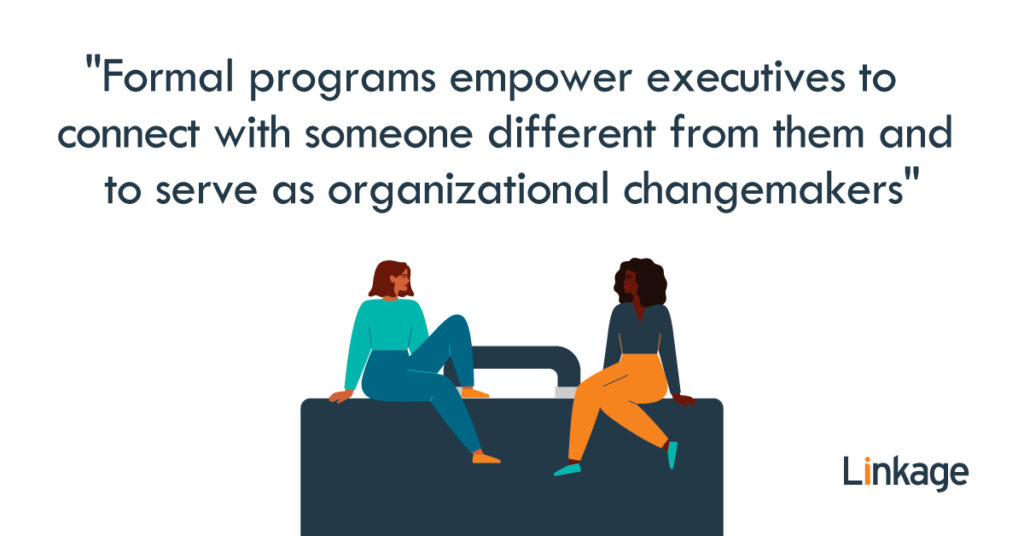 It’s important to note that informal sponsorship or mentorship programs do not take the place of formal ones. Formal programs empower executives to connect with someone different from them and to serve as organizational changemakers. Sponsors go beyond providing the usual support and guidance and serve as champions and advocates—especially behind closed doors—for the leaders they are sponsoring.

Benefits of Sponsorship to Sponsors

While the benefits of being sponsored are widely recognized, the benefits of being an executive sponsor are equally as motivating. Formal executive sponsors are empowered to increase their ability to be inclusive leaders. They can more effectively identify individuals’ strengths and strategically grow those individuals based on their superpowers—a truly invaluable skill for executives.

“It is really personally satisfying and rewarding to sponsor someone. People take great pride in the people they sponsor,” says Hariton. “Speaking from experience, there’s a lot of learning the sponsor gets from the opportunity. You are learning about how people think and getting a different perspective from other parts of the organization.”

Benefits of Sponsorship to Organizations

“We found that highly effective leaders are seven times more likely to be found in organizations that have formal sponsorship strategies,” says McCollum. “And more importantly, these people are more likely to believe in themselves and their success in the organization.”

In a time when organizations face complex challenges in both recruiting and retaining key talent, it has become increasingly important to identify and lift up underrepresented leaders.

Sponsorship is an effective way for organizations to achieve greater diversity in their leadership ranks, and this not only benefits the leaders and the sponsors, but also impacts the organization’s bottom line, creating better business results.

Take the Next Step | Tap into the power of executive sponsorship of women and other underrepresented leaders to build and maintain diverse leadership pipelines. Linkage’s Executive Sponsorship program is designed to be brought in-house to your organization and engages executives and sponsees in a meaningful and impactful learning journey as part of a broader strategy. Linkage’s Executive Sponsor Track at the Women in Leadership Institute on November 1-4, 2022 empowers individual executives to gain the skills and tools they need to become effective sponsors.

Director of Growth Marketing
Deana LaFauci is the Director of Growth Marketing at Linkage, where she oversees digital lead generation and qualification efforts and supports the positioning of Linkage’s products and solutions. She has a decade of experience developing and implementing digital marketing strategies to generate leads and support revenue growth. Her areas of expertise includes social media, content marketing, analytics, email automation, and digital presence management. She is passionate about bringing the Linkage story and the accomplishments of our clients to life through engaging storytelling across Linkage’s online presence.