My colleague Shannon Bayer and I attended a lecture on “Women and Negotiation: Their Place at the Table in the U.S. and Abroad” at Harvard University. At first, I thought this was going to be yet another session about how women don’t negotiate as well as men. And I have heard enough to know that there is room for growth when it comes to helping women have the self-confidence to advocate, not just on behalf of others, but also for themselves.

I was wrong. The dialogue quickly shifted to a larger discussion about overall gender identity and the expectations that we (both men and women) put on each other. For example, the speaker, Katrin Bennhold, staff writer for the International Herald Tribune, shared the story of how she showed a picture of a male pushing a baby stroller on a sidewalk durin 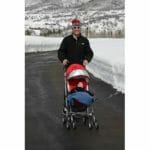 g the daytime to an American audience and asked for their reaction. It was unanimous—“He must be a gay nanny.”

The unanimous reaction is a stereotype layered on top of another stereotype. The American audience (made up of both men and women) not only said: “This person must be a nanny because he’s out pushing a stroller in the middle of the day” but they also concluded “He must be gay!” In reality, he’s not a nanny. And he’s not gay. He was just a Swedish dad on paternity leave.

This opened my eyes to the idea that in Sweden, at least, men can “have it all.” From what I’ve read, they can leave work for as long as 240 days and continue to receive a paycheck. In fact, 85% of Swedish fathers now take parental leave, which has dramatically changed the definition of “manly” and the expectations that people in Sweden place on the male population.

So, what shifts need to happen for true equality in America? Bennhold argues that we need to use the label “working parents” instead of “working mother,” to push for shared family leave, and just as importantly, redefine courage. But I left the session thinking, “Could more gender equality for men actually help provide better opportunities for women?”

Now, be honest. What would be the first thought that comes to your mind if you saw a picture of a man pushing a baby stroller in the middle of the day? Share your thoughts in the comments box.

Abri Holden is the Director of Inclusive Leadership Programs™ and an Associate Consultant at Linkage. Throughout her diverse experiences as a practitioner, researcher, and facilitator, Abri’s focus has been on working with organizations across a number of industries to create innovative strategies that accelerate their high-potential female leaders. Follow her on Twitter @abribrickner.