Five Ways to Use Social Media to Lead

Social media has fundamentally changed the way humans communicate.  Traditional media (radio, television, print, direct mail, etc.) allows for one-way communication.  In other words, it was possible to talk to the masses, but not listen to them.  With the rise of social media, we can now engage in two-way conversations with the same mass of people.  The conversations are often free, happening in real-time, and are not bound by geography.
Marketers were quick to seize on the opportunities presented by the likes of Facebook, Twitter and blogging, but the implications go way beyond marketing.  Social media can be employed both inside and outside your organization.

Here are five ways you can use social media to lead your organization:

1. Use social media to listen to your customers.

In 2007, Dell launched a website called Idea Storm (http://www.ideastorm.com) where customers can make suggestions and vote on suggestions made by others.  The site is based on SalesForce.com’s IdeaExchange platform and modeled after Digg.com, the popular social bookmarking site.  The site enabled Dell to gauge consumer interest in products before developing them.  One of the first ideas from IdeaStorm to bear fruit was a Linux-based PC, which it successfully took to market in only sixty days.  Other companies, including Starbucks and Proctor + Gamble, use social media to get ideas from  customers using similar methods.  By using social media to listen carefully, your organization can follow suit and focus resources on bringing products to market once you discover that there is an existing audience for them.

2. Use social media to engage your employees.

Dell’s IdeaStorm was so successful that months later, they launched EmployeeStorm, a similar site aimed at gathering feedback from employees to make Dell a better company.  Like IdeaStorm, employees could make recommendations and vote on suggestions by others.  Suggestions ranged from menu changes to product ideas.  In addition to facilitating communication between employees and management, there are also social media tools to encourage communication between employees.  Yammer is a Twitter-like service that organizations can use to create a private network for coworkers to communicate.  It is used by over 100,000 businesses worldwide, including Cisco, Nationwide, and Pitney Bowes.  Leaders can use social media to facilitate communication both vertically and horizontally within an organization.

Social media is quickly becoming a must for organizations looking to recruit top talent.  LinkedIn, the popular business networking site, is rapidly expanding into the recruiting field as companies replace outsourced agencies with internet solutions.  Elisa Bannon, Director of Talent Acquisition for U.S. Cellular, said in 2009, “We’re easily saving $1 million dollars this year alone” by using social media.  Leaders of organizations can use social media tools to increase the speed and decrease the cost of their recruitment efforts. 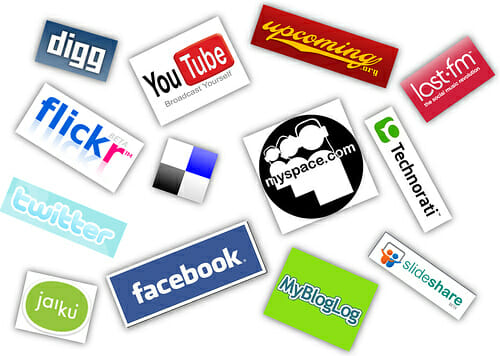 4. Use social media to get feedback.

Online tools like Rypple make it easy to solicit anonymous feedback from others.   Rypple allows coworkers to publicly recognize others while privately offering constructive criticism, offering realtime feedback that is more effective than periodic reviews.  Likewise, Get Satisfaction makes it easy for any company to set up a customer service community where consumers can give feedback on products and services.  Get Satisfaction gives people four basic ways to engage with a company: ask a question, share an idea, report a problem, or give praise.  Among others, Microsoft’s start-up business group successfully used Get Satisfaction to build a direct feedback loop with their customers when developing products.  Great leadership depends on accurate feedback, and social media can be used to gather such feedback quickly and accurately.

5. Use social media for knowledge management.

Social media can facilitate the capturing of information to be shared among employees across both space and time by enabling collaboration.  Wikis, websites which allow easy creation and collaboration of documents and pages by community members – the most popular of which is Wikipedia – can enable organizations to pool their knowledge into one place for everybody to access.  Other social media platforms, such as discussion boards, can also accomplish this.  Increasingly, knowledge management platforms like SharePoint are incorporating social media features, such as comments, ratings, and tags.  Jim Collins, best-selling author of Good to Great, describes the most effective leaders as those who ensure the success of their organization long beyond their departure.  By using social media for knowledge management, you can ensure that the organization you lead thrives well into the future.

The impact of social media extends well beyond the realm of marketing.  The leaders of the future will need to know how to use it effectively.