Energy to Action: Reflections from TechWomen 2016

Linkage’s Jillian Ihsanullah and Briana Goldman recently had the privilege of leading an action learning program on leadership development as part of the US State Department and Institute of International Education’s (IIE) annual sponsored TechWomen program in Silicon Valley. Here, Jill shares her reflections on the experience and the remarkable projects this group will bring back to their home countries in the coming months.

Far in the distant future, historians may come across pictures from this night and assume the images are of just another early 21st-century Silicon Valley party, albeit an exotic one. We would forgive the mistake.

You had to be there to understand: the building hum of excitement, the rapid conversations, the tweeting, the hugging of strangers, and an undercurrent of intense energy suddenly focused front and center. It was all about the women on stage. The passion and pageantry of their beautiful dancing and other forms of presentation eclipsed only by a powerful understanding, our shared knowledge of their true identities. The women were not travel ambassadors or cultural entertainers. They were highly-educated scientists, business owners, technologists, mathematicians, and engineers. These 90 women represented the top 4% of over 2,300 applicants, all of whom are some of the most talented emerging STEM leaders in the world.

One could say this night, in the cavernous cool-as-you-would-imagine meeting space in the heart of Twitter Headquarters that the long-anticipated beginning of TechWomen 2016 had finally arrived. But with the electricity in the air and the powerful hope and belief in possibilities emanating from the building, it was more of a bursting forth.

Thirty-six hours later, my job would be to channel and focus this energy to help these women impact struggling communities around the world. 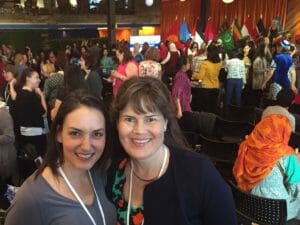 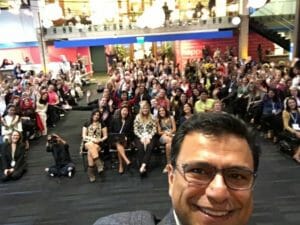 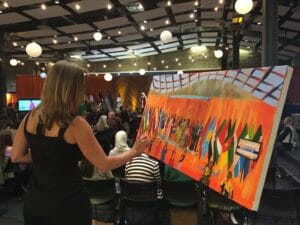 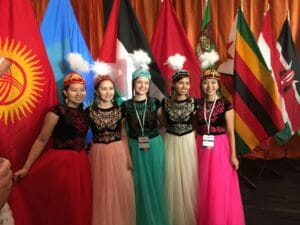 In Search of Solutions

Our purpose: Enable the TechWomen 2016 emerging leaders to create and implement leadership action learning projects back at home that would solve a problem in their communities. Looking back, 17 out of 20 of the 2015 projects we helped lift off in last year’s workshop have come to fruition. This year we had bigger plans.

It is September 15. The women arrive at Yahoo! headquarters for an action-packed day. We begin with an important question. What does it take to succeed as a woman leader? The women complete an individual leadership assessment and engage in peer coaching on their results. Then, they are ready for their teams. What issue would each country choose to focus on? How would they use systems thinking tools (approaches that help to identify the related but distinct causes that make up a complex system or challenge) to more clearly understand a problem?  As we dove into impact projects, the lively, impassioned discussions began. The teams reviewed their pre-work, agreed on focus areas, created causal maps, identified leverage points, and composed challenge questions.

Palestine – How can we increase the number of leadership opportunities for women?

Rwanda – How can we reduce the high school dropout rate for girls?

Turkmenistan – How can we improve energy savings for individuals?

Uzbekistan – How can we help women get flexible part-time jobs?

Zimbabwe – How can we improve career guidance for STEM fields?

Each team was allocated one minute for a “headline” presentation. The representative from Team Kenya started to speak while sitting on the floor to demonstrate what school is like for children with no desks. The speaker from Team Egypt was able to bring to life the plight of currently “endangered” women artisans. Sierra Leone interwove their group’s interest in both environmental issues and waste management. Country by country, focus problems were revealed and the buzz in the room grew louder. 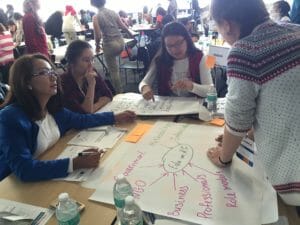 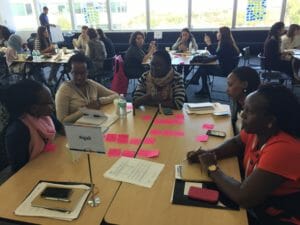 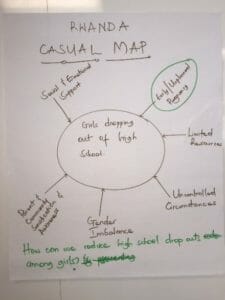 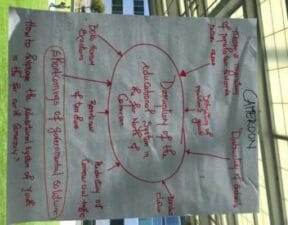 The teams continued work over lunch, several groups so involved in what they were doing that they had to be reminded to stop and get food. We then took a break to have a hands-on experience with a type of innovation.

Cue the most competitive “Marshmallow Challenge” probably ever witnessed!  The emerging leaders undertook the marshmallow, tape, string and spaghetti task with the same applied expertise and energy they had demonstrated since they arrived in the United States. The Marshmallow Challenge is a fun and experiential way for groups to come together for a team-building exercise, which illuminates and reinforces the value of rapid prototyping, adapting and learning in a competitive environment. They planned and constructed, shouted and applauded. In the end, the seven tallest freestanding structures were carefully measured and compared before Kazakhstan could be celebrated as the clear winner. The three top teams (Uzbekistan, second; South Africa, third) were interviewed about their learning. All were triumphant! 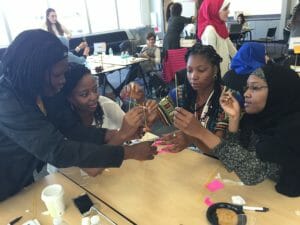 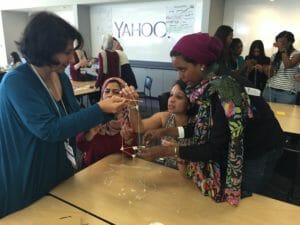 Returning with new perspective to the reality of “Community Impact,” each country sought “crazy” innovation from their team members and others in the room. Combining these best and most outrageous ideas with the Marshmallow Challenge lesson of rapid prototyping, the teams stretched, based on their identified leverage point, to define unique solutions and approaches that would address their country’s issue.

Once clear on their focus and proposed solution, the emerging leaders from each country collaborated to articulate a vision for what a future, successful project would look like for their community. They identified stakeholders, metrics and action steps. They created poster-sized blueprints to guide their work in the coming weeks, and to increase the impact of the pitch and launch of their projects to a panel of judges representing the Silicon Valley companies and TechWomen 2016 partners involved in the event. Finally, they hung their posters proudly on the walls for a structured gallery walk; an opportunity for the teams to provide valuable feedback to each other. 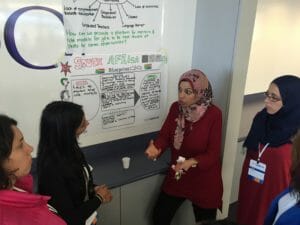 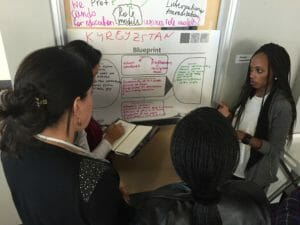 It was an honor to spend time with the TechWomen 2016 emerging leaders. We had open discussions about what it takes for women to succeed in leadership, and developed plans to address some of the biggest challenges and threats to the lives of people in their communities.

The work on Impact Projects will continue with help from assigned volunteer advisors from across Silicon Valley. Anticipation is building for the upcoming “pitch” competition event on October 7 at Oracle, followed by the implementation of the projects back in their home countries.

As we wrapped up our workshop day at Yahoo!, one of the company’s leaders came up to ask me what had been going on. She said, “I’ve never felt such energy in this room, I love it! I want to be a part of it!”

I am in awe of the talent and passion of these emerging global leaders and proud of their early blueprints. After all of the energy, the planning, the momentum I experienced in working with them, I left the Yahoo! campus with the somewhat-secret knowledge and thrilling conviction that communities across the globe are about to change. 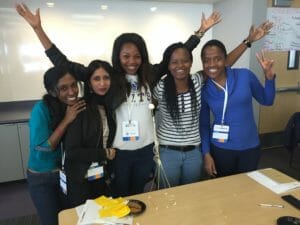 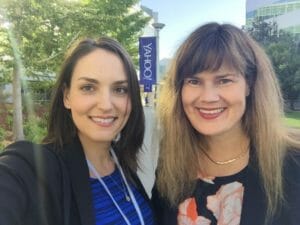 What approaches do you use to introduce fresh, high impact solutions to complex issues? I’d love to hear your ideas and questions at jihsanullah@linkageinc.com or @Jill_Ihsanullah.

You, version 2.0—Don’t give up on the things that bring you joy