Don’t pull the ladder up behind you

A few weeks ago, the world lost one of its most talented guitarists. According to CNN:

“Legendary Spanish guitarist Paco de Lucia, who is credited with transforming the folk art of flamenco into a more vibrant modern sound, has died. He was 66.

“The Gipsy Kings may have gone a long way toward making flamenco mainstream, but de Lucia paved the way.

“A proponent of the New Flamenco style, de Lucia’s career is defined by crossover collaborations with guitarists such as Eric Clapton, John McLaughlin and Al Di Meola, and jazz pianist Chick Corea.”

Does it matter that not many of us knew his name? Not really. He did play publicly, but most importantly, he shared, and he taught. He taught many of the most well-known, talented guitarists playing today. He was never afraid to give his competition his most valued secrets and tips.

“Another obituary of him said, ‘He didn’t pull the ladder up behind him…’”

And this is a valuable lesson for us all. Things change. Dreams come true. You get comfortable with where you’re at. It’s understandable to think that working hard, pulling off a few clever moments and becoming accomplished in your career earns you the right to smell the roses. But now that you’ve “made it,” the question I always encourage the leaders I work with is: Are you bringing people along with you? And I’m not talking about allowing people to ride your coattails! Are you giving them an opportunity to make it on their own accord?

The paradox is: maximizing opportunities for others actually generates more opportunities—usually more than one person can actually handle. And some people incorrectly believe that they need to own each of the opportunities—instead of letting their people have a chance to make it. They pull up the ladder behind them.

On the other hand, wiser, more successful leaders see these opportunities as a chance to extend a ladder to others. They don’t give anything away. Their people still work hard and earn their way, but they have someone giving them a ladder.

I’ve always judged the quality of for-profit companies by the quality of their products, how fast they grow, the good that they do, and quite frankly, by the number of millionaires that they create.

What have entrepreneurs created if they’ve only built wealth for themselves? What have they built? What have they really added to the world? The most successful organizations have leaders who don’t pull the ladder up. Ever.

Have you pulled the ladder up behind you? 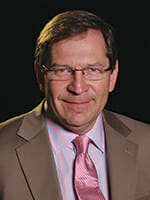 Mark Hannum is a Principal Consultant at Linkage. He has over twenty years of experience in organizational and leadership development, systems thinking, coaching, competency modeling, and executive team building and alignment. Mark’s skilled leadership and innovation has resulted in the successful implementation of many organizational design projects with client mergers and acquisitions.

Mark Hannum is Chief Research Officer Emeritus at Linkage.  Through his work with executive teams, leadership teams, and shared services organizations; his clients have credited him with helping them manage through difficult risks, improve business operations, lead and coach through acquisitions and integrations, and take advantage of growth opportunities.