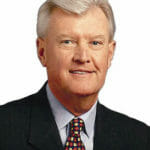 On September 14, 2011, Linkage welcomed HR legend Bill Conaty on the Thought Leader Series. Below, you’ll find the second half of his 30-minute interview with Linkage’s Rich Rosier following his prepared remarks.

Rich Rosier:  We have a question from Carolyn at AT&T.  “What are some of the most effective ways you have found to recognize and reward top performers when a promotion is not possible at that time?”

Bill Conaty: That’s one that very much applies to today’s economic environment.  When you look around, where salaries have been frozen, bonuses have been frozen or cut, and 401(k) plans have been either eliminated or postponed, you have to find ways to recognize and reward people in this tough environment.  What I found is the best way to do that is to have an informal discussion.  Coming up to you and saying: “Rich, I want you to know that we are going through some tough times and, you know, I’m not able to give you an increase in salary or a bonus right now but I want you to know that I love having you on your team, and as soon as we get through this cycle I am going to do everything we can to make sure you are recognized and rewarded for the effort that you are putting forth.” Now, that took about two minutes to say, and how many times do you think we do it?

In this environment, leaders are more reluctant to have those face-to-face discussions with people because they think that “Geez, I can’t answer all their questions.” But you know, these are the times when you need to communicate more and more face-to-face.  Forget the emails and the like.  Wherever you can, get a group together and say” Here’s what’s going on.  I can’t answer all your questions, I can’t tell you when the lay-offs are going to stop, but here’s what I do know, we got three new orders last week that should service well, increase our backlog, etc.”– And what you usually do in those meetings is to dispel the rumors.  The rumor mill is usually twice as bad as the actual situation.  And you get huge credit for going into a focus group in this kind of environment. So, I think those are some of the ways that you give people recognition and rewards in a tough economy when you can’t hand checks out every day.

Great.  Our next question is from Christy at Herman Miller.  She writes: “What are some examples of soft, subjective judgments and how do you convert them into objective criteria?”

Well, probably one example of a soft judgment would be on that topic we talked about of great leaders developing great succession plans, and the fact that we were often asked if we put a particular dollar value so to speak on leaders who have developed a cadre of great successors.  And we didn’t say 20 percent of your bonus is going to be based on how well you develop people.  But we looked at that as kind of a softer way of saying, boy, this individual has come along with executing and making their numbers and getting good results and getting good satisfaction survey results. This person has developed a half a dozen great leaders, and people really want to work for this individual.  And so, as a result, we need to subjectively give this individual some discretionary additionally money—or additional recognition or promotion or whatever.  So that might be an example of something that is not metrically measured, but yet, if you have that intimacy with the leadership team that I talked about, you are able to sort some of that out, and say these individuals deserve additional recognition because of their ability to develop people.

Our next question is from Twitter. The person writes: “Should these concepts and models run differently in startups versus established organizations?”

Good question.  You know, I have not really thought about that one but I think that those principles relate to startups as well as mature companies.  I mean again, and I love the question because I think that often times, in startups, it is an entrepreneur, it is a technologist, somebody who thinks technology first and people later.  But I think you come around to that view.

Over the past couple of years I have done some work with Michael Dell down in Round Rock, Texas.  And Michael—a pretty successful guy, but you know—his game was technology and working with technologists.  And so now, when you go from a garage operation to a $60 billion company, you have to start thinking more about how you are going to attract, develop, assess, and retain world class talent.  I think that sometimes that evolves.  And it is not instinctive.  It is not instinctive for somebody who at 19-years-old is the founder of their own company and has never had to go through any career path. So career path—What’s that?  What is so important about that?—Well, to 99 percent of the population, that is important.

So, I think the question is a great one because often times the technology outdistances the talent side of it upfront.  But at some point in time, that talent piece has got to play in a huge way if you are going to sustain and grow that business.

Dawn from Manulife, asks: “In the case of a new leader where the prior leader did not provide the direct report with any candid and honest feedback and there are concerns with this report meeting expectations, how do you suggest the new leader prepare and deliver the overdue feedback?”

I get it. I think there has to be a climate set.  If the leaders have come from outside of the organization, it is going to be a lot easier.  If they have come up from the inside, it is a little more difficult because the organization might be expecting more of the same so to speak.

Either way it has to be dealt with.  And that starts from the top down and making sure that in those conversations, leaders get in the “Here is what I love about you and here is what I would really like to see you work on.”  And you can do that and have that kind of discussion without saying “Here are your strengths, here are your weaknesses or here are your development needs.”  You can do it without that lingo, but you come in with the same kind of headset around “Here is what I think you are doing great, here is what I want you to do more of, here are a couple of things that I’m just not sure about and I haven’t seen this out of you and I want to see more of it.” I think the discussion can start that way and then get more focused as you go.  But, it has to happen.

So let’s say that you are watching this broadcast and you are self-assessing, and you are honest with yourself and candid, and you say your organization is nowhere near where it needs to be in terms of a level of talent mastery.  How would you encourage them to get started?

I would say very simply, I would look at the seven principles and I would kind of rate myself just subjectively.  Where do I think we stand on these and where do we need the most work?  And if number one is your issue, you really have a problem and so if that is the case, you have  to work at convincing the CEO and leadership team that this is important.  If that is not the issue, then you have a great head start.  Most CEOs become interested in making this work when presented with the dilemma of what happens if we don’t do this right, which is another approach—showing where we think we can go if we pay more attention to this game, and what we think is going to happen if we don’t.  Show the consequences again, up and down.  Then I think you can make some real progress.

But I would kind of look at those principles and at where I can really make an impact.  But the first one is the one that has to get handled.  And if you have somebody—and often times you’ll have a CEO that says look, I really want to do this,  I’m not sure I’ve got the time or the resources to do it, but help me—that is when somebody in HR or the rest of the organization could really make a value added impact.

On that point, have you seen any studies or research that shows a correlation between a high level of talent mastery in the organization and improved business results?  Does that exist?

Well, I would say it is not finite what we have come up with.  But of the companies we have studied, there was a pretty direct correlation to positive business progress and performance in this economy because we were looking at some banks and we were looking at some electronic s companies.  So, you know, outdistancing their peer group. We also had companies we were studying that were in route to talent mastery when the CEO either resigned or was removed and we have seen the whole effort fall right off the wagon.  That we have seen, and in no case was it related to how well they were working the talent mastery stuff.  It was usually related more to a strategic global business decision and whether they had stepped up quick enough to embrace it.  But I have seen none that flipped over the wrong way because they were pushing the talent mastery.

Bill, unfortunately we are out of time. I really appreciate the dialogue and your prepared remarks before.  Fascinating stuff.

If you are interested in leveraging the recording of this entire session internally, call 781-402-5555 for details on the Linkage Thought Leader Series’ On-Demand options.