A Conversation with Andrés Tapia, Chief Diversity Officer of Hewitt

Linkage’s Seth Resler sat down with Mr. Andrés Tapia on April 28, 2010 at Linkage’s Leading Diversity Summit.  At the time, he was the Chief Diversity Officer and Emerging Work force Solutions Leader at Hewitt.  He is currently the President of Diversity Best Practices.

Mr. Tapia hosted the keynote panel on leading diversity and is the author of The Inclusion Paradox: The Obama Era and the Transformation of Global Diversity. Below is a transcript of their conversation:

Seth Resler: Tell me a little bit about your role within Hewitt—what you do on a day-to-day basis?

Andrés Tapia: I have a dual role and actually one grew out of the other. I am the Chief Diversity Officer and from the very beginning, I strategically made diversity business imperative—because of the increasing diversification of our clients’ workforces. Due to that strategy opportunities came up to work and consult with our clients specifically on their diversity strategies, as well as embedding it into the other consulting we’re doing for them. And so out of that, I developed a new role, which is as an emerging work force solutions leader—which means I lead on diversity and emerging work force consulting practice.

Seth Resler: Sounds interesting! You also have a new book—it’s about the Obama era. Tell me a little bit about it.

Andrés Tapia: Yes, it’s called The Inclusion Paradox: The Obama Era and the Transformation of Global Diversity. The backdrop is on what I deem the Obama era. What I refer to as the Obama era are two things: (1) the era that made Obama possible—demographic shifts that we see in this country. Not only the 30 percent racial, ethnic minority – which was a key to his election win, but millions of whites who voted for him because they themselves grew up with diversity or have experienced diversity in a significant way in the workplace. And (2), the Obama era is the man himself – that regardless of one’s own political preferences there’s no question that he, President Barack Obama is a transformational historical figure. Just by the sheer fact that he is the first biracial president of the United States has transformative powers. And then his own political philosophy about how he’s playing that out. So that era, or this era that we’re in, has many implications politically, as well as culturally. In my book, I focus on the cultural implications, and then I look at the implications of culture on the work of diversity and inclusion. I would say the global part of it is that I would make the case that President Obama is the first global president. Due to his upbringing, Kenyan dad and Indonesian experience, that has shaped his worldview and his perspective. He operates very globally, and that is also a transformative thing. Not only politically or geopolitically, but also for the diversity and inclusion work we’re all in. So that’s the backdrop. The Inclusion Paradox, which is the title, what do I mean by that? And my definition of the inclusion paradox is that in order to have inclusion rather than assuming similarity we actually have to know how to constructively call out our differences. If you think about the American mythology of the melting pot, it was about assuming similarity. And there was a time and place where that was helpful, particularly as we came out of the civil rights movement and differences were called out destructively. But now that we’ve gotten to the place of finding out and experiencing what we have as a common humanity, in the end we’re still different. Whether we’re gay or straight, male or female, black, white, Latino, Asian, Native American, introvert, extrovert—in the end, we are making our work forces more complex.

Seth Resler: So if I’m hearing you right, instead of looking for common ground, we’re talking about celebrating uncommon ground.

Andrés Tapia: Yes, and I would say that it’s good that we have found common ground. The first generation of diversity work did a good job of discovering that and building a foundation of commonality. But that paradigm has run its course. In the end, as much as we have things in common, we have a lot of things that are not in common. If we keep trying to assume similarity, we’re going to develop leadership 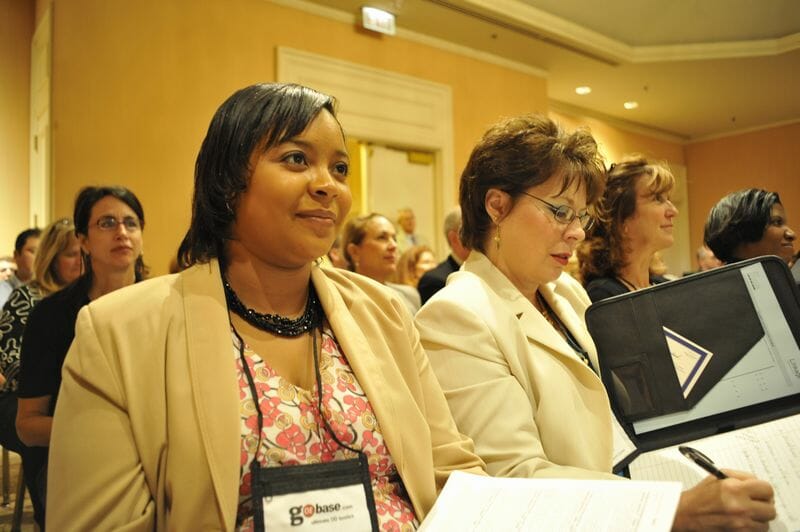 development programs, talent attraction programs, even benefits such as, 401K or healthcare that do not meet the needs of the diversity that we’re bringing in the door. And that creates inclusion. So the paradox is that in order to create inclusion, it’s the calling out of differences in a constructive way that truly creates an environment that we can all find something that meets our needs. I often say that, what is diversity? What is inclusion? And I use the definition of diversity as the mix and inclusion as making the mix work. So we’ve gotten good at bringing the diversity in the door. And we got ready for people that look different; we were not ready for people who thought different. And inclusion really is about making that mix work and making that mix work requires us to be culturally competent enough to constructively call out differences. Interpersonally, how are we different? How does that affect how we work together? And then from a deliverer of services, like for HR, how do I make sure that our minorities, for example, are participating equally in their 401K? Because our data at Hewitt shows that our 401K program is available to everybody and communicated to everybody equally, it leads to disparity in the utilization of the 401K—because we have assumed similarity. Rather than understand the different groups – African-American, Latino, Asian, white all have different patterns, behaviors and beliefs around money and how to utilize it and how to be motivated into those long-term savings.

Seth Resler: Right. Is there an argument that goes beyond avoiding negatives, when we look at the differences, and that there’s actually some constructive positives that come out?

Andrés Tapia: Absolutely. And that’s the key, when I say the inclusion paradox is about knowing how to constructively call out differences—is that people are afraid to call out differences because it’s only been done destructively. The greater diversity will lead to greater creativity and innovation.

Seth Resler: You hosted the keynote panel – what were the issues that were on the minds of the diversity and inclusion practitioners here?

Andrés Tapia: We touched on several issues. One was how do you take this work and truly make it global? American Express and EMC are already global, and have been really thinking about this global thing for a while. It’s a realization that our success in the U.S. needs to be globalized. The other issue, and one of the themes that Linkage really wanted us to discuss was that of leveraging relationships. So, my questions to the group were about how they are leveraging relationships globally and how are they leveraging relationships across functions? I asked Dana Chu, a lawyer, who is now Chief Diversity Officer how she is leveraging HR’s competencies. And with Jackie Glenn, who has been an HR practitioner her whole life, I asked about how she’s taking that and challenging HR to operate in a more business-oriented way. That was another thing about leveraging relationships but in a real cross-functional, cross-boundary kind of way. And I think finally the other preoccupation that everybody’s wrestling with, something that I refer to as we’re in an upside down world. You know, where an African-American is U.S. president, to be young is to be experienced, to be disabled is to be differently-abled, right? To be an emergent country is to be an ascendant power. To be a woman is to be rising in opportunities. And so in an upside down world, how does this change the rules for how we handle diversity and inclusion? A lot of the traditional ways of managing diversity and inclusion don’t work anymore. And so this is a group that has really wrestled with that—coming up with new answers to how do we take and create diversity? And a lot of the panel discussion was about this.

Seth Resler: I know you’re a very savvy social media guy. How can people find you and find the book online?

Andrés Tapia: I’m at www.inclusionparadox.com —I keep it regularly updated with new thinking based on conferences like this and conversations like the one we’re having, and a lot of great colleagues here at Linkage. I’m also on Twitter – @AndresTTapia. I actually did some tweeting here from Linkage on some of the sound bites from the keynote speakers and some observations. And it’s been great. It keeps me connected to people as a writer. It’s a great way to channel – writing’s a discipline. Social media really becomes a tool to maintain that discipline.

Seth Resler: Well, thank you so much for taking a couple of minutes to talk to us today.