In the next five years, 84% of organizations expect to have a shortfall of leaders—and this trend will worsen with the continued impact of the COVID-19 pandemic on workplace opt-outs and retirements. It is more important than ever to create the next generation of ready-now leaders.

Implementing a thoughtful and strategic executive sponsorship program allows organizations to build a pipeline of diverse leaders to fill this gap. And, executive sponsorship, when strategically focused on uplifting women and other underrepresented groups, can increase the diversity of executive teams, which in turn, can increase your business’s performance. According to research done by McKinsey, organizations with more diverse executive teams—specifically ethnic, cultural and gender-diverse teams—experience above-average profitability.

Countless studies have shown that when it comes to career development, the benefits of a sponsor—a senior manager with organizational power who’s not only mentoring but actively advocating for you—outweigh the benefits of a friendly mentor every time.

What makes sponsorship so powerful and effective? It’s a two-way street. When an organization’s high-ranking inner circle makes a conscious decision to sponsor—advocate for, and strategically engage with—women and underrepresented execs below them, rather than to just “mentor” them, a strategic alliance is created. The organization benefits from a protégé who’s giving 100% in terms of loyalty and performance to sustain the commitment of the sponsor, and the protégé benefits from having an advocate in the inner circle working for their advancement.

During a webinar hosted by Catalyst, Jennifer McCollum, CEO of Linkage, sat down with Lorraine Hariton, President and CEO of Catalyst, and Leslie Lynn Smith, National Director of GET Cities (Gender Equality in Tech), to discuss ways to advance gender parity through executive sponsorship. Check out a full recording of their conversation here.

Before beginning an executive sponsorship program, ask yourself and other essential players in your organization: What do you hope to accomplish with this program? You may already have a culture of uplifting women leaders in your organization that you are hoping to build on with a more formal process. Or, you may be looking to create that culture from scratch. Either way, understanding what you hope to achieve from an executive sponsorship program is essential.

Defining how you will measure success and identifying metrics to track the performance of the program is another important step in the early stages.

“The outcome metrics we are looking at are the most visible, including promotion, lateral movement and retention,” says McCollum. “Going a little bit deeper, we measure pre- and post-program, which usually spans nine to 12 months. This isn’t a quick one-and-done in a week or a month; these go on for years.”

2.  Ensure you have the support of key stakeholders within the organization

Effective sponsorship programs require the buy-in of the entire leadership team. The organization must intentionally create the space for sponsorship to occur, and it is crucial for individual executives to model what a successful sponsor looks and acts like.

The making of a successful executive sponsorship program includes instilling a culture of sponsorship as a core value within the organization. Integrating the program and all its successes and failures into the expectations of both individual and organizational goals will encourage sponsors and sponsees to prioritize these relationships.

Clearly defining the sponsor’s role and providing foundational training is critical to an effective executive sponsorship program. A great executive does not always automatically equate to being a great sponsor. In fact, many executives are not innately equipped with the skills they need to be successful in sponsorship. According to the Harvard Business Review, a successful program should detail what being a sponsor really means and hold executives accountable for their sponsorship duties and responsibilities. 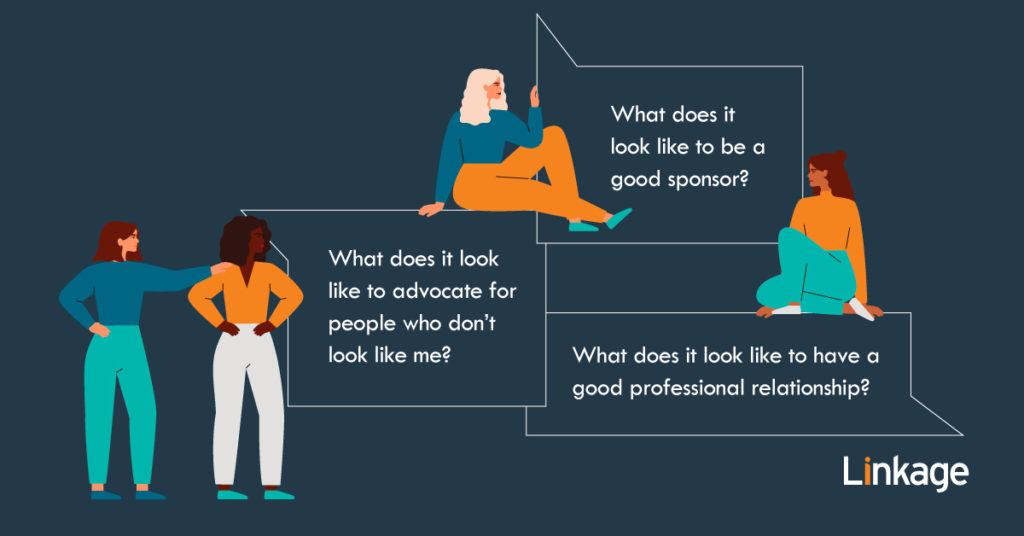 For the executives in your own organization, answering these questions can help guide them on their sponsorship journey.

4.  Support a culture of sponsorship by providing continued clarity

Providing as much clarity as possible about expectations for all parties involved is another way to ensure the success of the sponsor–sponsee relationship.

“We provide really specific clarity to the sponsor about their role and the responsibility of that role. They’re selected very carefully, so they understand the serious nature of being a sponsor,” says McCollum. “Their job is to create momentum and pathways for women and underrepresented leaders to join alongside them in the executive ranks. But to do that, they have to extend their brand and deeply believe in their sponsee’s potential.” 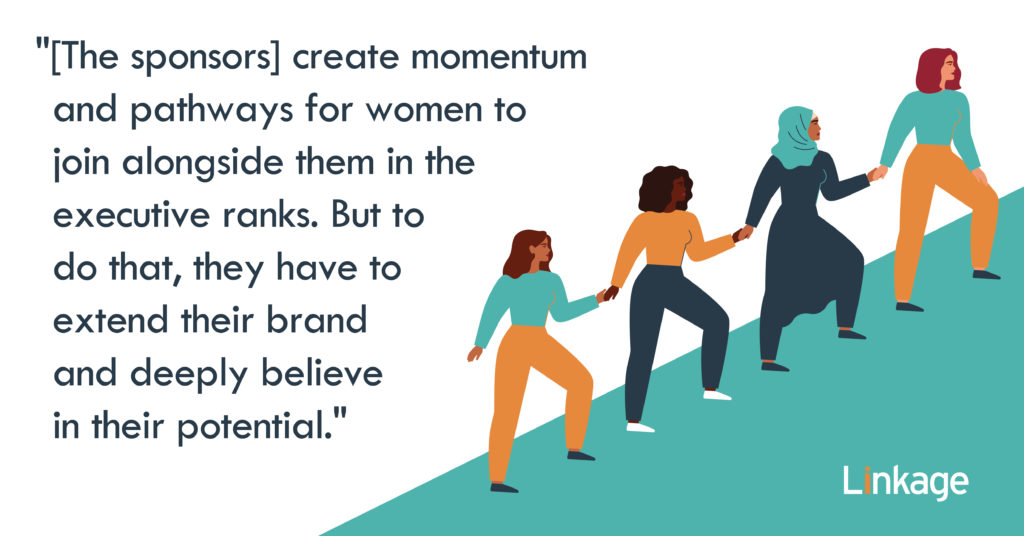 Once your executive sponsorship program is set up, it’s important to continuously assess its performance against previously defined metrics, and to provide ongoing support and assistance to all parties involved.

Regular education, consistent check-ins, and accountability tracking are essential pieces of the puzzle. The long-term success of any executive sponsorship program can be achieved by laying a solid foundation and setting clearly defined, measurable and attainable goals.

Take the Next Step | Tap into the power of executive sponsorship of women and other underrepresented leaders to build and maintain diverse leadership pipelines. Linkage’s Executive Sponsorship program is designed to be brought in-house to your organization and engages executives and sponsees in a meaningful and impactful learning journey as part of a broader strategy. Linkage’s Executive Sponsor Track at the Women in Leadership Institute on November 1-4, 2022 empowers individual executives to gain the skills and tools they need to become effective sponsors.

Director of Growth Marketing
Deana LaFauci is the Director of Growth Marketing at Linkage, where she oversees digital lead generation and content marketing. She is passionate about the advancement of women leaders and creating cultures of inclusion. She uses compelling storytelling to engage and educate an audience of leaders and senior executives.